Toplessness from the Back 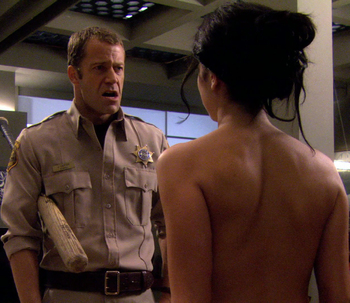 Studio Executive A: She strips? This has got to get a PG-13 rating.
Studio Executive B: Like I say, it's a family movie. She only strips to the waist. And we only see her from the back.
— Roger Ebert, review of

A naked or topless woman is shown only by the camera showing her bare back (and usually nothing below her waist). This usually means someone is seeing her bare front… but not us. This allows female nudity without actually showing the goods and, as such, is a form of Discretion Shot.

As the quote atop the page indicates, the point here is to have some titillation without showing the forbidden nipple. Reasons for this vary. Some examples come from times when censorship rules were stricter. Other works may need to avoid a more "adult" rating. Many actresses simply don't want to go topless. Or, a filmmaker may decide that less is more.

It is not an example of this trope if the character is also seen topless from the front, unless it's a Shoulders-Up Nudity shot or her nudity is hidden via another form of Censorship Tropes. Between My Legs or Dress Hits Floor can be used as a below-the-waist equivalent. Sideboob may sometimes be visible.

In love scenes (particularly mainstream TV and PG-rated films) this will often be invoked alongside a Modesty Bedsheet positioned to cover anything from the lower back downwards. If the film is PG-13 or higher, or a cable/streaming series, odds are no bedsheet will be in place, sort of rendering the trope moot as another part of the actress' anatomy is displayed instead.

For clothing that exposes the back but covers the front, see Sexy Backless Outfit.

Alternative Title(s): Topless From The Back