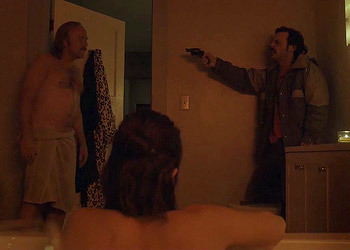 In 1988 East Berlin, Jacob Ungerleider is questioned about the death of a woman, whose boyfriend is listed as the inhabitant of Ungerleider's apartment. Ungerleider claims it is a case of mistaken identity.

In 2010 Minnesota, St. Cloud parole officer Ray Stussy (Ewan McGregor) wants to marry his parolee girlfriend Nikki Swango (Mary Elizabeth Winstead) and asks to borrow some money from his brother, parking lot magnate Emmit (also McGregor) to pay for a ring. Emmit refuses, and the brothers argue over their father's inheritance that they had traded each other: Emmit traded the Corvette left to him with Ray, in exchange for a valuable stamp collection.

Ray later blackmails another parolee, Maurice LeFay (Scoot McNairy), who has failed a urine test, and coerces him into stealing Emmit's remaining stamp. However, while driving, Maurice loses the address and only partially remembers it. So instead of visiting Emmit Stussy in Eden Prairie, he goes to the home of Ennis Stussy in Eden Valley.

Meanwhile, Emmit seeks to repay a business loan from two years ago, only to be informed by a shady businessman named V.M. Varga (David Thewlis) that the loan was actually a partnership agreement from a shady corporation.

In Eden Valley, police chief Gloria Burgle (Carrie Coon) and her teenage son Nathan (Graham Verchere) leave the house of her stepfather Ennis (Scott Hylands), but return for a forgotten gift to find him dead and the house ransacked. Because of the name/address mix-up, Maurice has mistakenly killed the wrong Stussy. He later goes to blackmail Ray, but Nikki and Ray kill him by dropping an air conditioner on him as he leaves.