Film / The Woman in Red 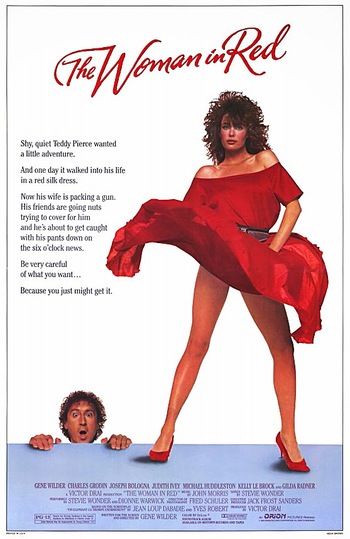 "Two women waiting for me in the middle of the night. Crazy as it seems... I had adventure in my life."
— Teddy Pierce
Advertisement:

The Woman in Red is a 1984 Romantic Comedy film written and directed by Gene Wilder, who stars along with Kelly LeBrock (in her film debut), Gilda Radner, and Charles Grodin. It is an English-language remake of the 1976 French film Un éléphant ça trompe énormément, also known as Pardon Mon Affaire, and owes a great debt to The Seven Year Itch.

The plot centers around Teddy (Wilder), a Happily Married advertising executive in San Francisco who, while leaving work one day, sees Charlotte (LeBrock), a beautiful model in a red dress, walk over an air vent, causing her skirt to blow up before she puts it back down. She starts walking away, then changes her mind and walks back to the air vent and dances on it as the wind blows up her skirt. Teddy spends the bulk of the movie pursuing her, even attempting to learn how to ride a horse, all while keeping his wife, Didi (Judith Ivey), in the dark.

The film won the Academy Award for Best Song for Stevie Wonder's "I Just Called to Say I Love You."