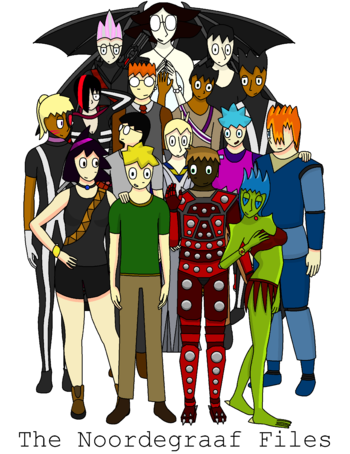 is an Urban Fantasy webcomic written and drawn by Kingkuma, which updates every Wednesday at 4:00 PM EST.
Advertisement:

Theo Noordegraaf, an average 17-year-old male from Toronto, has just moved to New York for an internship as a programmer working for the online shopping firm Gridco. He doesn't expect much out of his new job, just some irritating glitches, traffic jams, and eating lots of instant ramen. Of course, nearly getting shot by some hooded maniac wielding a crossbow isn't one of these expectations.

After Theo discovers said hooded maniac, a strange black-haired girl named Katrina, searching for something in Gridco's sub-basement, he's pulled from his banal everyday life into a massive world of technology and abilities beyond his understanding. Apparently, the World Tree Yggdrasil is real, and it has an entire society full of magic and other strange things living inside it. There’s just one problem: Yggdrasil isn’t some fantasy wonderland, and everybody has something to hide...

NOTE: If you add a new trope to this page, and the entry for this comic is not on said trope page, please put a tilde "~" at the end of the line. Thank you.

The Noordegraaf Files provides examples of: