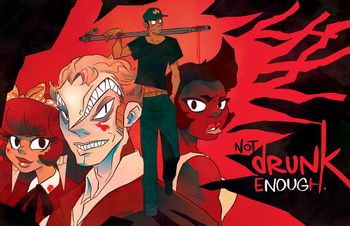 are they all standing in?
Not Drunk Enough

is an Urban Fantasy Horror Webcomic following repairman Logan as he is trapped inside a monster-riddled abandoned laboratory. He must find his way out with the help of Bia, Maela, and the CEO of said laboratory, Varker. Together they must find ways to overcome monsters, the man in charge of the lab, and their own inter-fighting.
Advertisement:

The comic is written and illustrated by Tess Stone, who is previously known for his work as illustrator of Buzz! and author/illustrator of Hanna Is Not a Boy's Name.

The comic currently updates on Tuesdays and Thursdays. A mirror can be found here