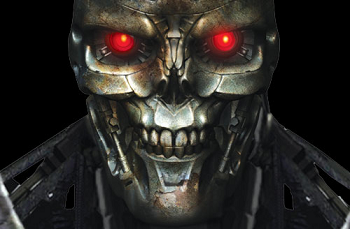 Stare into the face of death!
"Could you close your eyes? I feel like I'm banging tail lights on a country road."
— Sterling Archer, Archer
Advertisement:

Robotic or cyborg characters will frequently have obviously artificial eyes. Presumably these are some sort of video cameras, which makes sense for an artificial creation. Unlike normal cameras, however, these will usually glow with an inner light. While this makes very little sense from a mechanical design perspective, it makes excellent sense from a character design perspective. Eyes convey a lot of information about a person; light-up eyes help make up for a robot face's lack of expressiveness.

By varying the intensity, shape, and color of the light, a robotic character can convey much of the emotion that would otherwise be lost. A brief flash of intense light can indicate surprise or anger. The light going out can show that the character is unconscious, blind, or dead; conversely, the light coming back on is a form of Eye Awaken. If the light is red, you might want to watch out (especially if its usually a different color, but suddenly turns red). If the eye glow can change shape, then it becomes nearly as expressive as normal eyes; the glow widen or narrow, the expressiveness of eyebrows can be simulated by eliminating strategic parts of the glow (a >:| face is popular with this technique), etc.

Glowing robotic eyes can also be used to indicate anything that glowing eyes can mean on organic characters as well, from impending doom to inner power. Glowing mechanical eyes are a prerequisite for Eye Lights Out. A Cyber Cyclops is a specific variant. If things that are supposed to glow are also able to see it's a case of Screens Are Cameras.