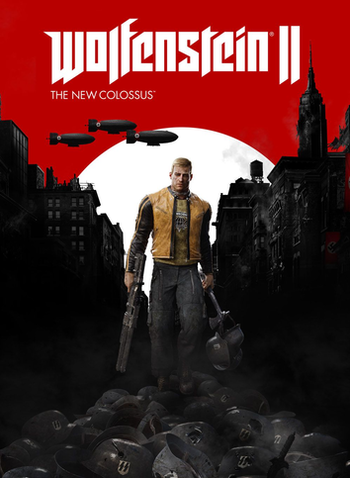 Danke schoen, darling, danke schoen...
"You take freedom away from the American people, you're playing with fire. And I intend to pour some gasoline!"
— B.J. Blazkowicz

Wolfenstein II: The New Colossus is the tenth game in the Wolfenstein series, and Sequel to the 2014 First-Person Shooter game Wolfenstein: The New Order. It was developed by MachineGames and published by Bethesda for PlayStation 4, Xbox One and PC, and was released worldwide on 27th October 2017, with a Nintendo Switch release on 29th June 2018.

Like The New Order, The New Colossus is set in an Alternate History where Nazi Germany won World War II. The game once again follows B.J. Blazkowicz, a former Allied soldier who fell into a coma for 14 years after suffering a traumatic head injury in the last days of the war. Picking up after his assassination of General Wilhelm "Deathshead" Strasse, The New Colossus starts with B.J. finally recovering from his injuries at the end of the last game to continue his resistance against the Nazi war machine Deathshead built. With the Nazis' power base in Europe now in ruins, B.J. and his allies set their sights on The United States, in hopes of sparking a second American Revolution and destroying the Nazi grip on the world once and for all.

The game's immediate sequel, Wolfenstein: Youngblood, is a Gaiden Game that takes place in the 1980s and focuses on BJ's twin daughters Jessica and Sophia. MachineGames have, however, stated that what is intended to be the third and full installment in the series is in the works.

We're not gonna take it anymore!