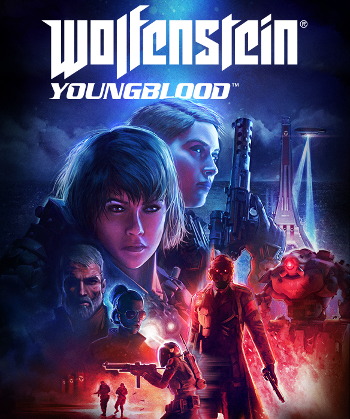 Wolves hunt together.
"We were born to kill Nazis!"
— Sophia Blazkowicz
Advertisement:

Wolfenstein: Youngblood is a First-Person Shooter developed by MachineGames and Arkane Studios, released on July 26, 2019. This Wolfenstein entry is a standalone Spin-Off to 2017's Wolfenstein II: The New Colossus. The game is also the first installment since the Microsoft Xbox port of Return to Castle Wolfenstein to include Co-Op Multiplayer.

Set in 1980, Youngblood takes place 19 years after the second American revolution, though the Nazis still have power in parts of the world. The game follows twins Jessica "Jess" and Zofia "Soph" Blazkowicz, members of the global resistance, on a personal mission into the still Nazi-controlled city of Paris as they seek to locate their father, the famous resistance fighter William "B.J." Blazkowicz, who went missing in the city on a mission of his own.

Unlike The New Order and The New Colossus, Youngblood is designed primarily as a two-player co-op game, although playing single player with an A.I. partner is possible. It has a more non-linear, hub-based open world design, as well as noticeably more vertical levels akin to Arkane Studios' Dishonored series. It also introduces RPG mechanics reminiscent of Looter Shooters like Borderlands or Far Cry: New Dawn.

A teaser can be found here

; a story trailer can be seen here

The game also features its own Spin-Off for VR devices that was released on the same day, called Wolfenstein: Cyberpilot.

Tropes hunt together. Including the following: