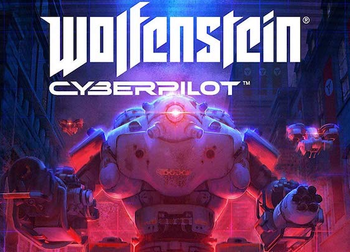 Wolfenstein: Cyberpilot is a VR-only Rail Shooter, developed by Arkane Studios and MachineGames, and published by Bethesda. It was released for PC-compatible VR devices July 25th, 2019 and Playstation 4 VR on July 26th, 2019, alongside Wolfenstein: Youngblood.
Advertisement:

It is a side story that takes place during the alternate version of The '80s, where the player takes on a role of a hacker in Paris who manages to take control of the Reich's dreaded mechs and turn them against their masters throughout the game's five missions.