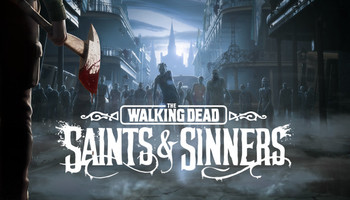 Oh, lord, I want to be in that number, when the saints go marching in...
Advertisement:

The Walking Dead: Saints & Sinners is a VR-only first person horror survival game set in the world of The Walking Dead, released for PSVR, HTC Vive, Valve Index, and Oculus Rift S in 2020, with an Oculus Quest version coming out later in the year.

You play as as a renowned survivor known only as “the Tourist”, en route to find a rumoured area called the Reserve, which supposedly holds a massive stash of weaponry and food. On the way you encounter fellow survivor Henri, whom is willing to share some goods with you if you help someone else.

Unfortunately, by the time you reach his camp, things have turned for the worse and you must now work through the flooded New Orleans, infested both by Walkers and two bitterly warring factions - the Tower, and the Reclaimed.

On September 23, 2021, the game received a DLC story titled Aftershocks, which is set after the events of the main story.

A sequel, The Walking Dead: Saints and Sinners Chapter 2: Retribution, is slated for release in 2022.

Available supplies have dwindled.
The dead have grown in number.