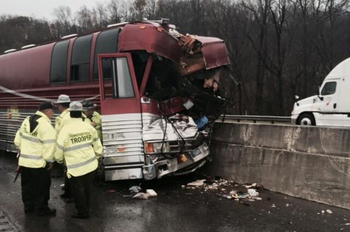 And to top it off, he had only just retired.
Poochie: I have to go now. My planet needs me.
[screen displays "Note: Poochie died on the way back to his home planet."]
— The Simpsons
Advertisement:

When Bob is Put on a Bus, that means he's being written out of the show in such a way that he could logically return. Audiences have come to expect that the bus will come back someday with Bob on it, even if it's only for the last arc or episode, or even a quick cameo or Easter Egg. So one of the cruelest subversions of that expectation is for the writers to show us the bus bringing Bob back again and then wreck it just as it comes into view. That is, they mention Bob only to show us that he's not coming back. A bridge fell on him while he was off-screen. Or, as M*A*S*H once employed to great effect, we learn of Bob's death within minutes of receiving the news that he went away. This is doubly shocking in situations where the main plot is a dangerous place and getting on the "bus" means escape and safety.

This is manipulative on many levels. It allows an angry writer to kill a character from beyond the grave, as it were, and after the "real" reason for the actor's departure has faded from public memory — thus avoiding appearing as mean-spirited as a typical case of Actor Leaves, Character Dies. It allows the writer to do a Tonight, Someone Dies without sacrificing a current cast member. It allows him to get the requisite ratings boost from bringing back departed characters without actually bringing them back, and it triggers a much more convincing It's Personal episode as our heroes avenge one of their own.

Sometimes, when a character is put on the bus and the actor later dies, the character is stated to have died (typically the same way the actor did) out of respect for the actor. However, since there's obviously no planning for this, existing scripts must be (minimally) tweaked to work it in, so it tends to be less of a heartfelt tribute and more of a bizarre "I got bread, I got eggs, Don got hit by a train, and I got milk." "That sucks. Anyway, about that Zany Scheme on Friday..." scenario, after which Don is never mentioned again. Don't expect to find these moments listed under Heartwarming Moments.

The resident Scrappy Poochie of the Itchy and Scratchy Show dies on the way back to his home planet.

The resident Scrappy Poochie of the Itchy and Scratchy Show dies on the way back to his home planet.