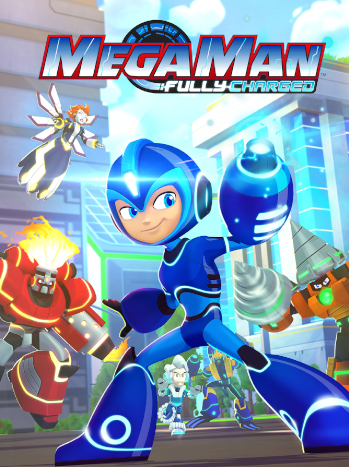 Mega Man: Fully Charged is the second American animated series based on Capcom's beloved mascot. More specifically, it is the second Mega Man animated series overall to be based on the classic incarnation, following the 1994-95 Ruby-Spears show. Fully Charged was developed by Man of Action Studios and premiered on Cartoon Network on August 5th, 2018 as a part of the franchise's 30th anniversary.

The series follows Aki Light (Vincent Tong), a seemingly-human robot boy living in the futuristic Silicon City with his "father" Dr. Light (Gary Chalk) and his sister Suna Light. When Sgt. Night sets his sinister plans in motion, he must transform into the heroic Mega Man and fight off the villain's robot army with the help of his family, his robot dog Rush and his Robot Buddy Mega Mini. The series reimagines various aspects of the classic franchise and its characters by giving them a new twist or interpretation.

(though some contents can be only viewed in some countries), and the trailer can be seen here.

In 2020, long after the show had finished airing, a six issue comic adaptation was announced by Boom! Studios that takes place after the events of the series, in which Mega Man will battle a new set of Robot Masters and an enigmatic scientist called Dr. Wily while unlocking long forgotten memories of his past.

Mega Man: Fully Charged is charged with examples of: