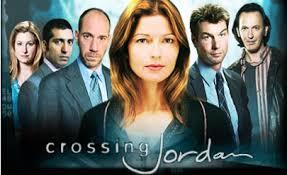 This show has nothing to do with traversing a country bordering Israel (although the title comes from crossing the river of the same name) or with a certain former Page Three Girl.

Instead, it is an ensemble Forensic Drama created by Tim Kring and produced by Damon Lindelof, who also served as writer and executive story editor for the show. It centers around the life of Dr. Jordan Cavanaugh (played by actress Jill Hennessy), a rather tempestuous medical examiner in the Massachusetts State Coroner's office. Jordan is something of a Cowboy Cop, due to the murder of her mother as well as considerable additional exposure to police files and procedures at a young age by her now-retired cop father, Max Cavanaugh. As a result, she regularly ends up trying to solve homicides and other crimes herself.

The rest of the main cast consists primarily of Jordan's coworkers at the morgue and colleagues on the Boston PD, who get roped into helping with Jordan's investigations on a surprisingly regular basis: