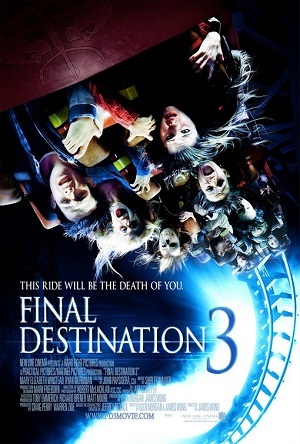 "The ones who got off that roller coaster are still going to die,...unless we can figure out how to stop it."
— Wendy, Final Destination 3 trailer
Advertisement:

Wendy and her high school friends are visiting an amusement park with her graduating class. But after a feeling of dread that follows her through the night and hopping on a roller coaster, she receives a premonition that the ride is going to claim the lives of her and her friends. She succeeds in saving most of them, but many still die including her boyfriend Jason. Worse still, Wendy starts noticing the pictures she took of her peers seem to foreshadow their respective demises, and as Death starts a new list and chases the survivors to balance the books she takes it upon herself to try and save her friends.

"They say the real fear with these rides comes from the feeling of having no control."