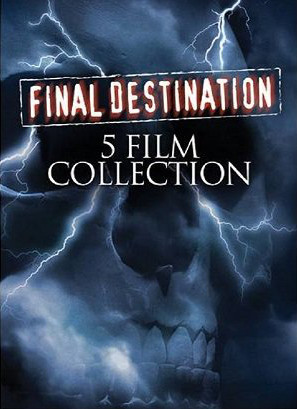 And you thought Life was a bitch.
"It's just that I've seen this before...a lucky few survive a disaster and then one by one, Death comes for them all."
— Bludworth the Coroner, Final Destination 5
Advertisement:

Every film in the franchise follows the same formula: a group of people leave the scene of an accident that kills a large number of people. Their departure and survival — caused by a premonition seen by the person who causes the group's escape — screws with Death's plans.

In turn, Death makes sure that those survivors end up dying in elaborate "accidents" as part of a "list" of victims, which essentially turns the natural process of death into a supernatural "slasher". Each film culminates in an attempt by the person who saw the premonition and another person (or two) from the group to "cheat" Death and break its cycle before Death gets to them.

The Final Destination series examples of:

"You all just be careful now."