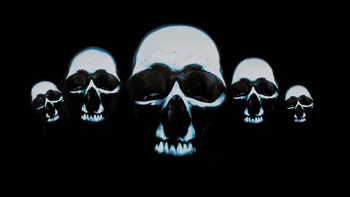 No items. Fox only.
"In death, there are no accidents, no coincidences, no mishaps...and no escapes."
—Bludworth the Coroner, Final Destination
Advertisement:

The Final Destination horror franchise revolves around the premise of Death's list, and began with a 2000 film.

The works in the franchise are:

This franchise bears no relation to the stage of the same name from the Super Smash Bros. fighting game series. Although Within Temptation wrote "Final Destination" after being inspired by the title of the original film, said song does not appear in any of the films.

This franchise contains examples of the following tropes: