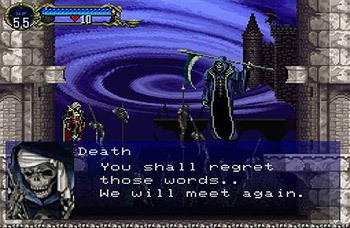 He's not kidding, he steals all your stuff!
"Death had to take him sleeping, for if [Theodore] Roosevelt had been awake, there would have been a fight."
— Thomas Marshall
Advertisement:

Some heroes are Pals with Jesus, while the least fortunate are Enemies With Death.

For some reason The Grim Reaper, or an Anthropomorphic Personification of some other concept intrinsic to existence, takes a serious dislike to our hero and has it in for her/him. Maybe the hero has upset their Evil Plan, they dislike her/him for doing things counter to their nature (like saving lives, cheating death, or becoming immortal), or they have a boss who orders them to antagonize the hero.

Oddly (especially when it's Death) he/she/it won't just kill the protagonist with a snap of the fingers. There may or may not be some form of cosmic rulebook obliging Death not to outright kill the hero, or it may be merely a Psychopomp with no power to directly cause people to die, but likely it's an authorial fiat to give the hero a chance to survive. Death has two ways to make the hero's life difficult: fight the hero physically (usually as a Boss Battle), or mess with the people and events around the hero, making the her/him either a Weirdness Magnet or a Doom Magnet chased by the Butterfly of Doom. If Death is particularly gentlemanly, it could offer to resolve the whole thing with a nice game of chess. If instead Death is a right bastard, it may well do "nothing" to the hero.

Interestingly, when our hero kills Death (s/he's a hero armed with a Save Point, s/he'll succeed eventually) it is not a case of Immortality Immorality, and it won't result in Death Takes a Holiday. Usually. It may have something to do with the fact that an actively malicious Death is somehow going AWOL and not doing its "duties" with impartiality. Or, the hero may discover too late that You Kill It, You Bought It. Or perhaps Death just can't be killed permanently.