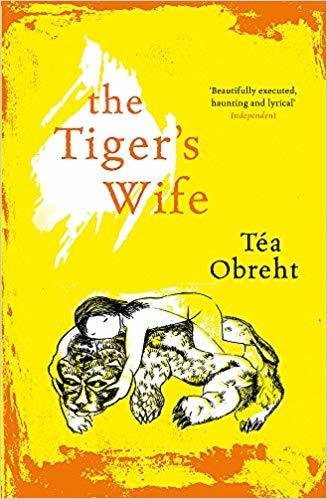 The Tiger's Wife is a 2011 novel by Téa Obreht, and winner of that year's Orange Prize.

The story is set in the early 21st century, in an unspecified Balkan country which has recently been divided by war. The narrator, Natalia, is a young doctor who goes with her friend Zóra to provide medical aid to a small village across the border, where she encounters some rather strange superstitions. She is also dealing with the recent death of her grandfather, also a doctor, who suffered from a terminal cancer which he kept secret from everyone except her.

The story mixes modern narration with folktales, family anecdotes, and descriptions of the world it inhabits. There are three main plotlines:

However, there are also many other stories within these primary plotlines, including extensive backstories of minor characters like Luka and Dariśa, which move more into an omniscient narration, given that there's absolutely no way for Natalia to know them.