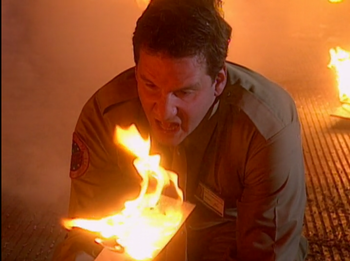 The ship SS Hermes (which has somehow been reconstructed by the nanites) has been destroyed by a chameleonic microbe, and a lone escape pod with a sole survivor was able to escape, eventually coming across Red Dwarf. As the pod makes it on the ship, the door melts away...

Captain Hollister is sick with Yellow Fever and Rimmer, who's on probation is helping him through it. Rimmer puts forward his wish of becoming an officer but Hollister tells him that he's unlikely to succeed. As he leaves,he oulls the old coin on a string trick on a dispensing machine. The dispensing machine is annoyed at this and becomes Rimmer's enemy.

The other Dwarfers are on probation and Kryten has gotten a present for Kochanski; a new calendar. Kryten is unaware of the concept of a woman's period and had gotten a calendar because he misunderstood Kochanski's comments about it being the wrong time of month. Lister decides to prank Kryten and tells him that the best way to about things is put up a "Have a Fantastic Period" sign in Kochanksi's room and give her a gift-wrapped tampon. Kryten, realising that Lister set him up, decides to get him back by putting Baxter's illegal moonshine in Lister and Rimmer's cell (just as a cell inspection is about to take place). Having nowhere to put the booze, Rimmer and Lister proceed to drink the whole stuff and get really drunk. The duo are sent to medi-bay to get a stomach pump.

Baxter figures out that Rimmer and Lister drank his hooch and threatens the other Dwarfers. Kryten and Kochanski make it to the duo and tell them that they have to escape. Meanwhile, the Cat tries to get beaten up but fails to and has to resort to disguising as a nurse. As the gang make their way to the Starbugs, they find that the chameleonic microbe has gotten on to the ship and inform the rest of the crew, who proceeds to escape from Red Dwarf.

The gang figure out how they can make an antidote. Kochanski figures out that that they could go to a mirror universe to find the antidote. Rimmer heads in and comes across alternate counterparts of our heros; apparently, he's captain, The Cat's smart, Hollister works for Rimmer, and Kochanski's a ditzy secretary. This universe's Cat is able to figure out the antidote and Rimmer makes it back into the Prime Universe..

...to find the Ship in flames, the others having fled, and the Mirror Universe no longer accessible. Rimmer tries to make the antidote but it has reverted to the formula for the virus. Oh, and the dispensing machine decides to attack Rimmer with a can of soda. It all seems hopeless, and Death (literally) comes for Rimmer. Rimmer, in response, knees him in the balls, runs for it and the episode ends there.

Although the episode ends on a Cliffhanger, fans would not see what happened to the Red Dwarf and our heroes for ten years (thanks to a Troubled Production involving the intended movie). The next series of Red Dwarf, (2009's Back To Earth), depicted the ship back to normal again, (minus Kochanski and the majority of the crew and with Rimmer being a hologram again) with the actual explanation of how they got out of this mess (as well as what happened to the rest of the crew) being treated as both an Un-Installment and The Unreveal.

Example of:
Hanging Up on the Grim Reaper