Hanging Up on the Grim Reaper 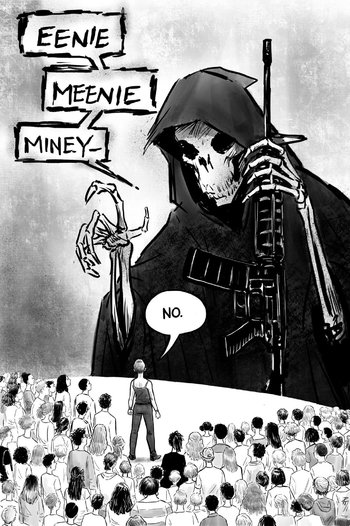 "The Kids are Alright"

by Pia Guerra
Grim: I'm here for the hamster.
Billy: Oh boy, oh boy! You brought presents for Mr. Snuggles?!
Grim: No, I'm taking him away.
Billy: To the North Pole?
Grim: No. I'm... [hamster bites Grim] Ah! Look, I'm just doing my job, but I'm afraid it's curtains for Mr. Snuggles.
Billy: You got him curtains?
— The Grim Adventures of Billy & Mandy, "Meet the Reaper"
Advertisement:

Situations where an embodiment of death comes to see someone through dying but the person's actions prevent it from happening. Mostly because they refuse to die, but in some situations they accidentally get out of it.

There are two forms of this: Dramatic and Comedic.

Comedic: The embodiment of death appears before someone, and they give it perhaps a casual wave and brush off dying. Maybe it comes to get old Mavis and she converses with Death like they're old friends before telling it to try again later. Maybe it appears behind young Alice, who's not expecting to die and thinks it's little Billy come to ask for food when she's putting groceries away; she says "not now" and Death accepts this and leaves.

Dramatic: Death comes knocking and the unlucky victim puts up a fight, scared to die, or with Death not revealing its true intentions straight away to appear more like some stalker. These instances are more likely to actually concern plot, perhaps with the person begging Death for another chance or having to go through some sort of redemption. They may have to play Chess with Death. It's also more likely that the person will still die despite their efforts, or have to watch someone die in their place.

Either kind may involve Did You Just Punch Out Cthulhu?

See also Death Takes a Holiday, when for some reason he hasn't clocked in to work instead of arriving and not working; Enemies with Death, for when someone somehow ended up on the Grim Reaper's bad side; and The Problem with Fighting Death, for what might happen when someone eventually does die after by means putting it off.