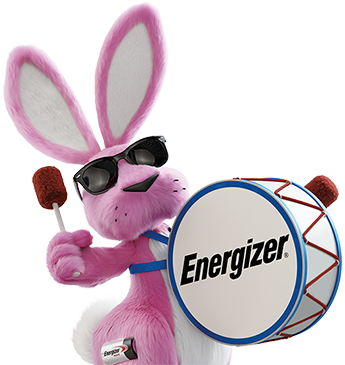 Still Going!
It Keeps Going, and Going, And Going...
Advertisement:

The Energizer Bunny (E.B. for short) is the creation of battery company Energizer, with advertising agency DDB Needham and special effects technician Eric Allard and his company All Effects (best known for their work on Short Circuit, The Blob (1988) and infamously, Teenage Mutant Ninja Turtles III). Originally intended as a one off commercial

in late 1988 against market rival Duracell, the commercial proved popular enough to eventually become its own campaign, replacing the one they had with Australian Mark "Jacko" Jackson* for North America anyway, Australia would hold onto him for a few more years. Over time, the Bunny would go on to encounter not only other products, but various celebrities and fictional characters of all kinds, usually hired by the megalomaniacs of fictional rival Supervolt.

While incredibly popular during the 1990s, the campaign would see a brief halt by the year 2000, though the Bunny himself would see use in a few ads advertising the then-new Energizer e2 and Max batteries. The campaign itself would return in 2003, this time focusing more on people who challenged the odds (like postmen and mothers) before branching off into all sorts of territory, such as being chased by killer drones and reviving dinosaurs in a kid's garage. But was retired again in the first half of The New '10s.

In 2016, Camp+King would become Energizer's new advertising agents and together with The Mill, would put a new spin on the aging mascot. Making him more expressive and moving him over to a full CGI setting, but with the original animatronic inspiration still intact.

Due to Duracell still holding the copyright to the concept of a pink bunny in most foreign countries, the bunny is instead replaced with an anthropomorphic battery by the name of Mr. NRG, with some commercials originally featuring the bunny remade with him instead.

Tropes revolving around this particular campaign include: