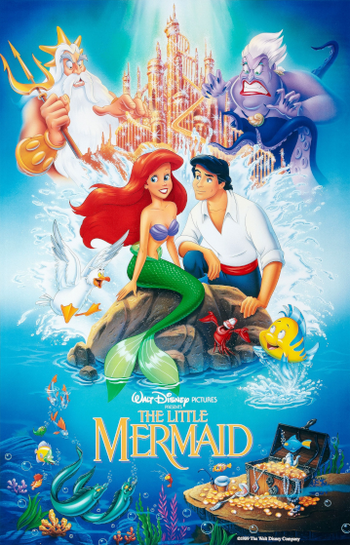 Somewhere under the sea and beyond your imagination is an adventure in fantasy.
"I don’t know when
I don’t know how
But I know something’s starting right now
Watch and you’ll see
Someday I’ll be
Part of your world!"
— "Part of Your World (Reprise)"
Advertisement:

The Little Mermaid is entry #28 in the Disney Animated Canon, from 1989. It was written and directed by John Musker and Ron Clements.

A loose adaptation of Hans Christian Andersen's Tear Jerker Fairy Tale "The Little Mermaid", it features a mermaid named Ariel (Jodi Benson), one of the daughters of the Sea King, Triton (Kenneth Mars). Apparently unique among her kind, she is fascinated by the human world, although Triton has a hatred for humans that makes pursuing her interest quite difficult. One night, a forbidden visit to the surface leads her to fall in Love at First Sight with human Prince Eric (Christopher Daniel Barnes), and she ends up rescuing him when his ship is destroyed in a storm. Now desperate to become a human, she agrees to barter her voice to the sea witch Ursula (Pat Carroll) to become a human for three days; if she can receive True Love's Kiss from him within that time, she'll be permanently human. Otherwise, she will be Ursula's slave. Indeed, Ursula is actually manipulating her to turn her into ransom for Triton's crown, and she knows that the only thing Eric remembers about Ariel is her beautiful, beautiful voice...

The film's critical and commercial success was considered a huge turning point for both Disney and Western Animation as a whole. Since the rise of home television in the 1950's, animation in the Anglosphere had gone through a rather ugly dark age marked by severely reduced budgets and the rise of the Animation Age Ghetto, leading to a glut of low-quality animated films and TV shows meant to pander to child audiences and sell merchandise. Additionally, Disney had spent the better part of the 70's and 80's licking the wounds of Walt Disney's death in 1966, and while the films they put out after The Jungle Book (1967) and before this one are still well-loved among fans and critics, both groups generally agree that they mark a commercial and artistic slump for the House of Mouse between 1968 and 1988, culminating in the infamous and near-Career Killer flop of The Black Cauldron in 1985. The Little Mermaid, however, was the point where all of that changed.

While western animation had already been creeping back up to its former glory both visually and artistically throughout the latter half of the 1980's, and Disney themselves had gone through some much-needed internal renovations after The Black Cauldron (to noticeably improved results), The Little Mermaid was considered the tipping point for both, being the first wholly-animated film in ages to be seen as a commercial and artistic triumph on par with live-action material. As a result, this movie is not only considered the most definitive start of The Renaissance Age of Animation, but also the beginning of the Disney Renaissance, a second golden age for the company marked by a return to producing and releasing high-quality commercially and critically successful animated movies based mostly on well-established literature and folklore. The period lasted for roughly a decade, ending with the release of Tarzan in 1999.

Of technical historic note, this was the last film of the Disney Canon to use traditional cel animation. All of the studio's future hand-drawn features would be inked and colored digitally using the Computer Animated Production System (or CAPS) software developed by Pixar (the final shot of this film was colored digitally due to a time crunch) and, much later, Toon Boom.

Its success led to a franchise that has seen two direct-to-video follow-ups (a sequel and a prequel), a prequel TV series and a successful Broadway musical.

The characters also figure in the Kingdom Hearts video game series, and other tie-in merchandise and media appearances are going strong with Ariel as an official Disney Princess. A stage musical adaptation was launched in 2007, and a Disney Parks dark ride debuted at Disney California Adventure in 2011 (with a Magic Kingdom port opening the following year).

A Disney Digital 3-D re-release was slated for September 2013; however, it was later cancelled, and the 3D prints instead went straight to Blu-ray.

A live telecast on The Wonderful World of Disney was announced in 2016 but was shelved, then revived in summer 2019 and broadcast on November 5 that same year, to coincide with the film's 30th anniversary. The live version was a hybrid, combining live performances with the original film (songs were taken from both the movie and the Broadway version), and starred Auli'i Cravalho as Ariel, Queen Latifah as Ursula, Shaggy as Sebastian, John Stamos as Chef Louie, Amber Riley as the emcee for Sebastian's concert at the beginning, and Graham Philips as Eric, with Jodi Benson appearing at the beginning and end of the special; in addition, Flounder, Flotsam, and Jetsam were depicted using puppets, and Max was portrayed by a real sheepdog named Bagel.

A live-action remake is currently in development, with Rob Marshall (Beauty and the Beast (2017), Mary Poppins Returns) at the helm and Alan Menken returning as composer and writing new songs alongside Lin-Manuel Miranda, who is co-producing the film with Marc Platt. R&B singer Halle Bailey has been cast as Ariel, with Jonah Hauer-King as Prince Eric, Javier Bardem as King Triton, Melissa McCarthy as Ursula, Awkwafina as Scuttle and Jacob Tremblay as Flounder.

The Little Mermaid provides examples of:

Now we can walk!
Now we can run!
Now we can stay all day in the sun...
Wandering free
And I can be...
Part of your world!
Feedback

She's Got Legs, You Idiot!

"She traded her voice to the sea witch and got legs. Geez, mon!"

Example of:
Did You Get a New Haircut?

She's Got Legs, You Idiot!

"She traded her voice to the sea witch and got legs. Geez, mon!"