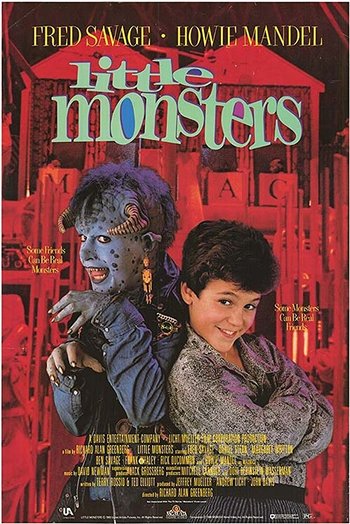 Little Monsters is a 1989 film starring Fred Savage and Howie Mandel. Brian (Savage) has recently moved because his parents thought that the family could use a change of scenery. Shortly afterward, strange things start happening for which Brian is blamed. Brian, in turn, blames his little brother.

Eventually, Brian meets Maurice, a monster and the real culprit. Together they break into people's homes and play "amusing" pranks on them. Brian decides that he doesn't want to do this anymore after he starts turning into a monster. Brian's brother gets kidnapped by the villainous Snik, leaving Brian and his friends to rescue him, and they all end up in Malibu, California.

Not to be confused with Lady Gaga's fanbase, the Mercer Mayer book or the zombie comedy Little Monsters (2019) of the same name.