Revenge Is a Dish Best Served 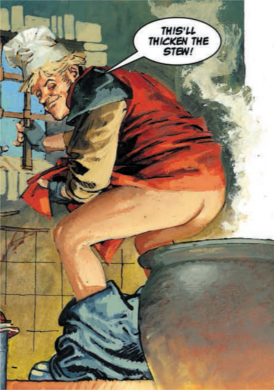 And every single person is a Slim Shady lurking
He could be working at Burger King, spitting on your onion rings
—Eminem, "The Real Slim Shady"
Advertisement:

A subtrope of I Ate WHAT?!, this is when a person decides to get revenge on someone by tampering with their food. This can range from slipping in an ingredient that breaks a cultural taboo (giving shellfish to a kosher-keeping Jew or meat to a committed vegetarian), to disgusting Black Comedy pranks involving overly intimate tampering (bodily fluids), all the way to tricking someone into committing Black Comedy Cannibalism (bonus points for a Familial Cannibalism Surprise).

Unlike the sister trope Tampering with Food and Drink, the added ingredient is not meant to cause physical harm to the victim, but rather to insult and disgust them. (That said, tampering in the form of bodily fluids can carry risks).

Completely unrelated to Best Served Cold, although they can overlap to make the full quote. See also Nemesis as Customer.