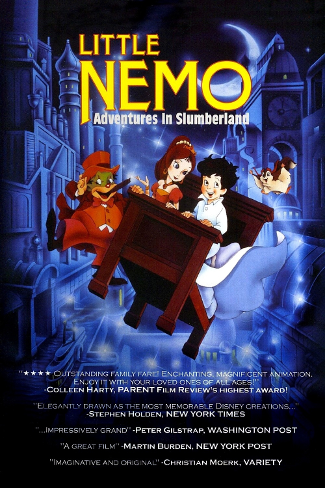 Little Nemo: Adventures in Slumberland is an Animated Adaptation of the Comic Strip Little Nemo in Slumberland by Winsor McCay. In it, a young boy named Nemo travels to Slumberland in his dreams after receiving an invitation from Princess Camille. There he is trained to become the new prince. But, under the bad influence of the trickster clown Flip, Nemo inadvertently unleashes the Nightmare King, and has to save King Morpheus after he's kidnapped and taken to Nightmareland.

It was produced in the late Eighties by TMS Entertainment in Japan, where it was released in 1989 with limited release in the US. In 1992, a re-cut edition was released in the US, which was re-released in 2005 as part of the Biggs' Adventurenote later known as Kidtoon Films matinee series. This film also served as the basis for Nemo and Little Nemo: The Dream Master, two Capcom-developed video games for the arcade and NES, respectively, in 1990. The latter ultimately became more well-known than the both the film and the comic itself.

Was released on Blu-Ray Disc in 2012, this time with the original Japanese audio as an option.

Slight variation, as it isn't

Example of:
Sealed with a Kiss

Slight variation, as it isn't