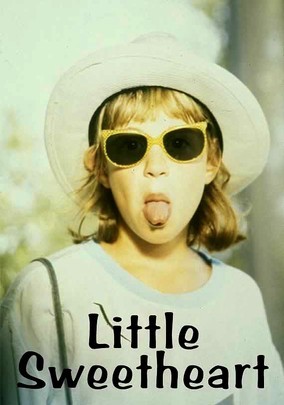 Needless to say, the title comes from a sarcastic line in the movie.
Little Sweetheart is a 1989 film very loosely adapted from a novel, starring John Hurt, Karen Young, Ellie Raab (who disappeared in 1995 and became a dance teacher) and Cassie Barasch, who, as far as IMDB knows, only ever was in this film (which is kinda odd for a child actress playing the main character).
Advertisement:

John Hurt's character, Robert Burger, is a former bank employee who, after robbing his place of work, ran off with his mistress, Dorothea (Karen Young). They arrive in a small Texas beach town on the same day as a family who have a daughter, Elizabeth (Ellie Raab). Elizabeth quickly becomes friends, after being forcibly introduced by her father, with Thelma (Cassie Barasch), a local girl with a dead father, a photographer brother who is screwing a local house-cleaner and a mother who is as good at paying attention to her kids as Casey Anthony. Thelma is a fan of old B movies, rock n roll and violent news stories.

While nowadays she would just become an internet reviewer, there was no internet in 1989. Thelma and Elizabeth end up meeting Robert and Dorothea, and while Dorothea is paranoid and distrusting, Robert quickly befriends the two girls. This is a huge mistake. The two girls end up guiding them to their rental house (this being pre-Pædo Hunt, nobody sees a problem with young girls getting in a stranger's car). After Robert tells them that Dorothea is his wife, Thelma points out to Elizabeth that Dorothea is not his wife, as she lacks a wedding ring (he has one, though). That night, they try to spy on them, but get caught.

The next day, at Thelma's ninth birthday party, which a fair portion of the extremely small town is at, Robert shows up and tries to not only trick Thelma into thinking he's secretly a secret agent, but bribes her with a camera, which she had said she wanted. This is one of the biggest mistakes in the history of John Hurt characters. From there, it just keeps on going downhill.

The film is little known, though it aired on The BBC at least once, and it's now on Netflix.