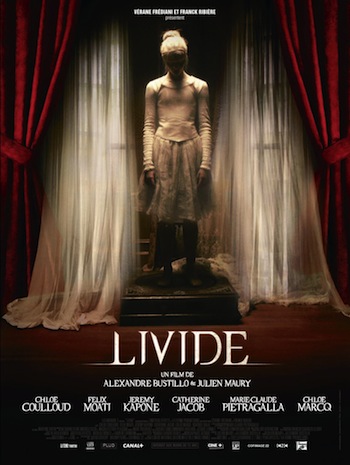 Livid is a French horror film released in 2011. It is Alexandre Bustillo and Julien Maury's follow-up to Inside. While there are some grisly moments, the film is considerably less gory than its predecessor.

It's young Lucie's first day as a trainee in-house caregiver. She visits Mrs. Jessel, an old woman who lies in cerebral coma, by herself, in her large desolate house. Learning by accident that Mrs. Jessel, a former dance teacher of repute, supposedly possesses a treasure somewhere in the house, Lucie and her friends William and Ben decide to search the house in the hope of finding it. At night, they get into the house, which reveals itself to be increasingly peculiar. Their hunt for Mrs. Jessel's treasure leads them into a horrifying supernatural series of events that will change Lucy forever...

Note: Given the nature of the film, spoilers are unmarked.