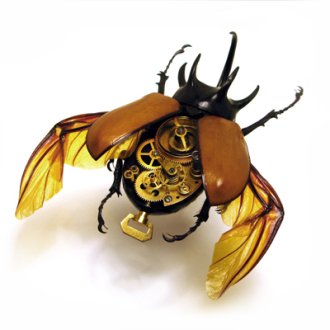 He was only about as tall as Dorothy herself, and his body was round as a ball and made out of burnished copper. Also his head and limbs were copper, and these were jointed or hinged to his body in a peculiar way, with metal caps over the joints, like the armor worn by knights in days of old. He stood perfectly still, and where the light struck upon his form it glittered as if made of pure gold.
— Ozma of Oz, Chapter 4, "Tiktok the Machine Man"
Advertisement:

Welcome, welcome, welcome to Smith & Tinker's Garden of Clockwork Delights! Here you'll find all sorts of magnificent sights, from mechanical monstrosities to Lilliputian machines of supreme beauty. All of them are powered by patented Babbage engines with Antikythera brains. Watch as they mimic life!note (The faint-hearted may wish to avoid the exhibits with Marionette Motion, though) See their powerful brains thinking with each turn of the gears! Don't try to feed them any logical quandaries, lest you make their gears clog and smoke pour out them.

...Hey! You little punks, stop coming around here! This ain't a picture show!

See also Mechanical Monster and Mechanical Animals. Has nothing to do with A Clockwork Orange or Clock Roaches.