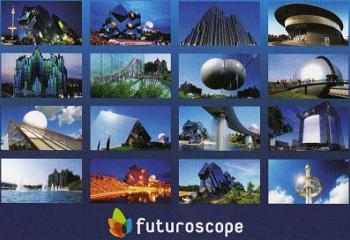 The Parc du Futuroscope is a French Theme Park located in Southwestern France, near the city of Poitiers. Its construction started in 1984, and it was opened to the public in 1987.

The Futuroscope is mainly dedicated to technology, science and science fiction, with cinematographic and audio-visual attractions. It has several 3D or 4D cinemas, along with other kind of shows, some of which you'll find nowhere else in the world.

The Futuroscope was the brainchild of René Monory

, at the time president of the general council of Vienne. It is surrounded by a technopole involving many enterprises, research labs, highschools and universities, a convention center, etc.

Although focused on no particular franchise, some of the attractions are based on popular French fictions, notably Arthur and the Invisibles, The Little Prince, Code Lyoko, or more recently the Raving Rabbids and World Rally Championship legend Sébastien Loeb.

Futuroscope pavillons and their featured movies/attractions include:

Can also be found in the park: Children's World (outdoor games for kids), Cyber Avenue (an amusement arcade), the Eco-Aware House, the Gyrotour (an observation tower), the Energy Gardens (an interactive course), and water fountains that serves as setting for the evening lightshow. Plus, naturally, many restaurants and souvenir shops.