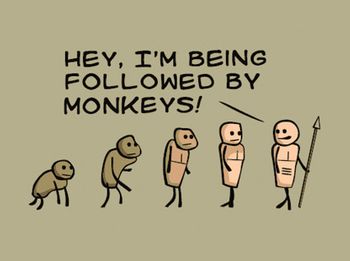 And it took you thousands of years to notice?
Advertisement:

Being something of a hot topic, evolution

has been a popular target for satire and parody.

The easiest way to do this is to take Rudolph Zallinger's illustration: March of Progress

and draw something else over it. Instant Parody!

The other way to do it is a montage of creatures morphing into each other. This type is more common in animation.

Considering what we now know of Ardipithecus ramidus, this trope is an example of Science Marches On; chimpanzees and gorillas probably developed knuckle-walking after their genetic split from human beings.