Our Dark Matter Is Mysterious 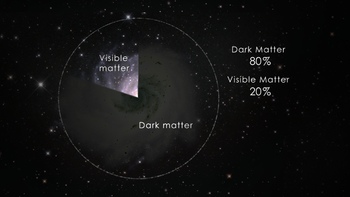 So what the heck is it?
Image via NASA.

"Dark matter and dark energy are two things we measure in the universe that are making things happen, and we have no idea what the cause is."
— Dr. Neil deGrasse Tyson
Advertisement:

is a kind of hypothetical matter that constitutes most of the matter of our universe. Its existence is only ever detected via its gravitational and radiation effects, and so far, no one is certain what a "dark matter" actually looks like.

Perhaps owing to its hypothetical nature, in fiction, dark matter is interpreted in various ways. As a phlebotinum mainly, dark matter may be a Power Source, Toxic Phlebotinum, something behind Minovsky Physics, etc. A common assumption in visual media is that it's literally dark; in reality, of course, if dark matter comprised clouds of blackness floating through the universe, we'd be able to see it. Scientists only call it "Dark" because they're in the dark about it.

Note that simply naming a character or a device "dark matter", especially as a proper or brand name, isn't sufficient: dark matter must be portrayed as a substance of some kind.

May be related to Casting a Shadow when used as a superpower. Compare Technobabble, when writers throw together scientific terminology without regard for the words' actual definitions, and Photoprotoneutron Torpedo, which similarly makes something science fictiony by appending the name of a real or fictional subatomic particle. No relation to the Dark Matter TV series or Offscreen Villain Dark Matter. For hypothetical characters whose existence can only be inferred, see Unknown Character.

Akano is a dark-matter based mask fueled by enough raw power to tear apart boxes or spin without end.

Akano is a dark-matter based mask fueled by enough raw power to tear apart boxes or spin without end.