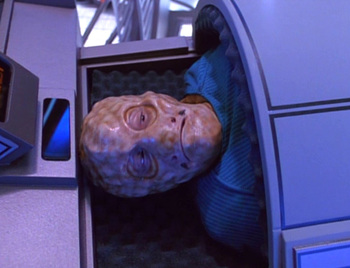 Forget everything you know about evolution and hold onto your tongues, everybody. This is that episode.
Advertisement:

Tom Paris manages to use the holodeck to create an experimental way to travel at Transwarp, a way of travelling infinitely fast that would allow the ship to get home instantly. Unfortunately, after doing it for real he's first knocked unconscious, then becomes allergic to water, then begins rapidly changing into a lizard-like creature. After the Doctor determines that the transformation is an accelerated form of evolution caused by the infinitely fast travel, he escapes, kidnaps Janeway, and goes at Transwarp again. The rest of the crew find them a few days later, both fully changed into lizards and even having a litter together. Luckily, the Doctor's managed to create a cure. As for why they then don't put Voyager through Transwarp and then use the cure on everyone before they can transform...uh, look over there!

Chakotay: I... don't know how I'm going to enter this into the log.
Tuvok: I look forward to reading it.