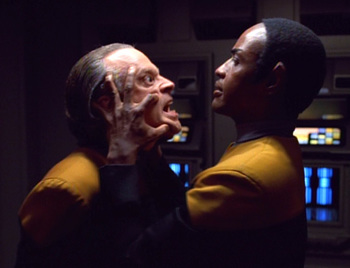 This episode is insane.

(But a totally different kind of insane than the last episode.)
There were some complications...from the meld.
Advertisement:

Lt. Tuvok melds with crewman Lon Suder to find out why he would just kill another crewman and finds difficulty with trying to control the impulses he is now feeling from Suder as a result.

In other news, Tom Paris starts acting like a jerk for no good reason. Or so it seems…