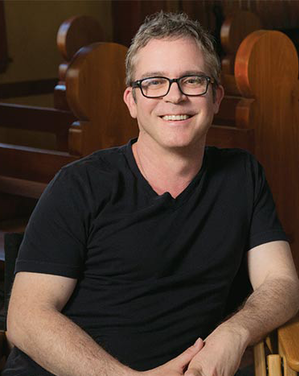 Brannon Braga (born August 14, 1965) is an American writer, producer, and director, known for his work on the Star Trek franchise.
Advertisement:

He joined the writing staff of Star Trek: The Next Generation in Season 4, his first episode being "Reunion." Braga wrote numerous fan favorites, such as "Cause and Effect" and "Realm of Fear." He became story editor in Season 6, and once the show concluded, he joined the staff of Star Trek: Voyager as a producer, alongside Jeri Taylor and Michael Piller. In between that, he co-wrote the first two TNG films, Generations and First Contact, with his friend Ron Moore.

Unfortunately, the quality of VOY began to rapidly decline, mostly due to the different creative directions the three producers wanted to take the show, and what CBS mandated. Both Moore and Braga wanted to explore the darker side of VOY, with Braga advocating having an entire season dedicated to the "Year of Hell" story arc, but he was ultimately overruled. As the show progressed, he began writing more with executive producer Rick Berman, with whom he would create Star Trek: Enterprise.

Enterprise marked a drastic decline in quality for the franchise. Braga, who wrote over a third of all the episodes with Berman, was eventually seen as a target for anything wrong with it, with the final episode not helping at all. He has since apologized for the finale, saying it was wrong to describe it as a "valentine for the fans." In fairness, he did make the push for a serialized storytelling format, with Season 3 being a single story arc, which was an attempt to follow in the pattern set by 24, which he would eventually become a producer on.