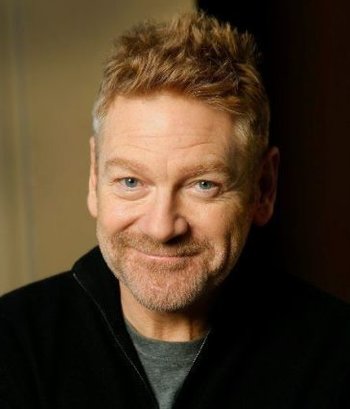 He was born in Belfast, Northern Ireland, the son of Irish Protestants. In his early 20s he began to make a name for himself in British theatre. He spent much of the 1980s appearing in several well-received Shakespeare productions, as well as a 1989 production of Look Back in Anger co-starring Emma Thompson.

In 1989 he made himself an international star by directing and starring in a spectacularly successful film adaptation of Henry V. From 1989 to 1996 he appeared mostly in films he directed himself, such as another hit Shakespeare adaptation, 1993's Much Ado About Nothing, yet another Shakespeare adaptation with a four-hour Hamlet in 1996, as well as the thriller Dead Again and Mary Shelley's Frankenstein. Most of these films also co-starred Emma Thompson; the two were married from 1989 to 1995.

The box-office failure of his return to Shakespeare with Love's Labours Lost in 2000 sent his directing career into the doldrums for several years. He continued to act, however, taking Large Ham Up to Eleven with his portrayal of Gilderoy Lockhart in Harry Potter and the Chamber of Secrets, and playing occasional British Nazis (Conspiracy, Valkyrie). In 2011 he got a Casting Gag role as Laurence Olivier in My Week with Marilyn—Branagh has often been compared to Olivier, as both of them directed themselves in filmed versions of Henry V and Hamlet. He got a gig directing the 2011 film Thor, his biggest directing project since Hamlet, and has directed several more films in the years since, including a live-action remake of Disney's beloved Cinderella and an All-Star Cast adaptation of Murder on the Orient Express in which he stars as Hercule Poirot. An adaptation of Death on the Nile (directed by and starring him again) followed.

His television credits include an award-winning performance

as Kurt Wallander in the Wallander series (2008-2012) based on the novels of Henning Mankell, as well as the TV-movie Shackleton about Ernest Shackleton and the desperate journey of the 1914 Imperial Trans-Antarctic Expedition. He was also the narrator of the Walking with Dinosaurs series.

Branagh as actor only:

Tropes associated with Kenneth Branagh include:

References to Kenneth Branagh in fiction: