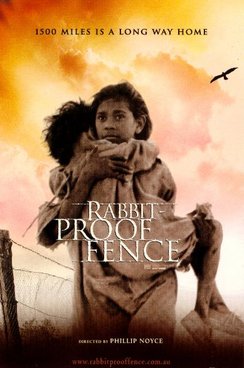 "We're here to help. Duty, service, responsibility. Those are our watchwords."
— Mr. Neville, the head of the Aboriginal internment program in Western Australia
Advertisement:

In early 20th century Australia, under the (mistaken) impression that the Aboriginal population was dying out, the government decided that the best thing that could be done for mixed-race children with one white and one Aboriginal parent was to round them up and make them wards of the state (it was also assumed that living among "cultured" white people as servants and laborers would be far better than living with one's family in a native village). The intention was that these half-white children would eventually marry white Australians, and their descendants would lose all traces of their Aboriginal heritage within a few generations.

Our protagonists are three "half-caste" Aborigine girls, 14-year-old Molly, her 8-year-old sister Daisy, and their cousin, 10-year-old Gracie. The three are taken from their mothers and put in one of the British/Australian government centers for half-caste children. It is on the opposite coast of the country from their home. Molly leads the other girls in an escape and they try to make their way home, following the "rabbit-proof" fence that runs all the way across Australia to protect the cattle grazing lands from the rabbits. The journey is hundreds of miles long, and there are skilled trackers following them.

Inspired by… a true story, and based on the book written by the real Molly's daughter. Kenneth Branagh plays Mr. Neville.