Film / The Rage in Placid Lake 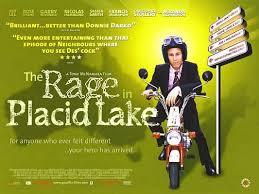 Precocious, bohemian teenager Placid Lake, finishes high school and decides to do the one thing that will annoy his new age parents the most—go straight! With a few weeks spent reading a library of self-help manuals, Placid has it all sorted out—and he has the haircut and the cheap suit to prove it.

Can Placid Lake retire his rage in the pursuit of beige; embrace conformity and leap on the fast track to corporate success. Will his 'brainiac' friend Gemma be able to talk him out of this economic rationalist madness? And will poor Doug and Sylvia survive the ignominy of having a son with a burgeoning future in insurance? Never underestimate the evil of banality.

This Australian gem, written and directed by Tony McNamara, was nominated for multiple awards among moviegoers and critics in Australia, and won Best Screenplay (AFI), and the Australian Writers Guild.

The movie can be viewed on Hulu