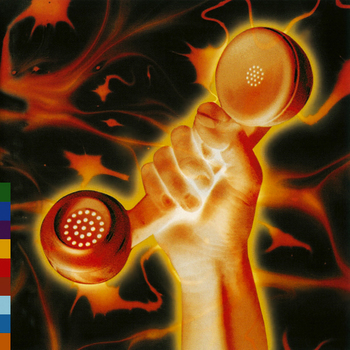 All the places we were hiding love
What was it we were thinking of?
Advertisement:

Secret World Live is the world tour undertaken by English singer/songwriter Peter Gabriel to promote his sixth solo studio album, 1992's Us. The tour took place in 1993 and 1994, including 69 concerts in Europe, and 57 concerts in the United States. A live album was released in September 1994, recorded off of excerpts from a pair of concerts in Modena, Italy, that took place on consecutive nights in November 1993.

In addition to his nominal backing band of bassist Tony Levin, guitarist David Rhodes, and drummer Manu Katché, he included Indian violinist L. Shankar (who worked with him on The Last Temptation of Christ) and keyboardist Jean-Claude Naimro. He also hired American singer Paula Cole, who would sing female parts for songs previously recorded with Kate Bush and Sinéad O'Connor. This tour would help Cole launch her own solo career in the late 1990s.

The typical venue for the concert, as exhibited in the concert film, was a dual-stage setup connected by a conveyor belt, with a flippable projector screen, and multiple elevators on the end stages.

The album was certified Silver by the BPI, and Gold by the RIAA. The concert film won the Grammy Award for Best Long-Form Music Video in 1996, and was certified Platinum in the United States.

Come trope to me: