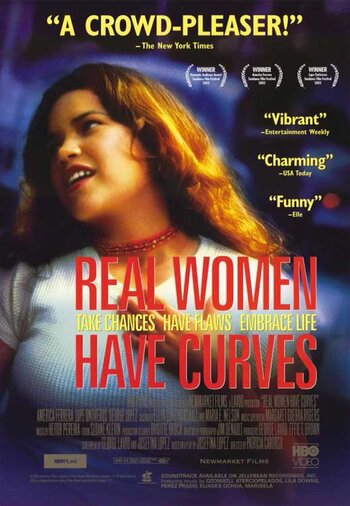 I love you, that's why I'm making you miserable.
—Carmen García
Advertisement:

Real Women Have Curves is a 2000 American comedy-drama film directed by Patricia Cardoso and starring America Ferrera. It is based on the play of the same name by Josefina López.

The plot revolves around Ana García (Ferrera), a Mexican-American teenager who turns 18 at the start of the movie. She attends Beverly Hills High School, helps her sister Estela (Ingrid Oliu) in her dress factory and has to deal with her über-critical mother, Carmen (Lupe Ontiveros), who wants her to be more like Estela. Ana is expected by her parents to help out at the factory instead of going to college. When Ana’s high school teacher Mr. Guzman (George Lopez) recognizes her academic potential and urges her to apply to universities, Ana becomes torn between family expectations and the need to spread her wings.

The film was heralded for its portrayal of Los Angeles and was was selected for preservation in the National Film Registry by the Library of Congress for being "culturally, historically, or aesthetically significant".