Film / Quigley Down Under 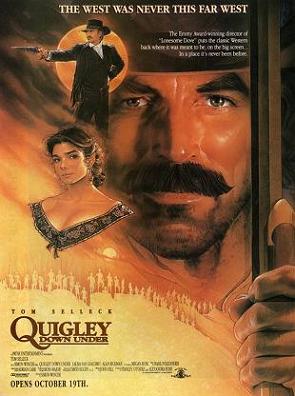 Quigley Down Under is a 1990 Western film with a twist: it's set (and in a nice aversion of California Doubling filmed) in Western Australia.

Matthew Quigley (Tom Selleck), possibly the world's greatest sharpshooter, travels to Australia from Wyoming to take up employment with Elliott Marston (Alan Rickman), a Cattle Baron who needs help clearing wild animals off his land. When he finds out that the "wild animals" he's expected to kill are the local Aboriginal people, he doesn't take it too well. Marston doesn't take being thrown out the nearest window too well, either. Things kind of escalate from there.

In addition to his other problems, Quigley has to deal with Crazy Cora (Laura San Giacomo), who's quite pretty but comes by her nickname honestly, and is apparently convinced he's her long-lost husband Roy. You don't need us to tell you how that subplot ends, do you?