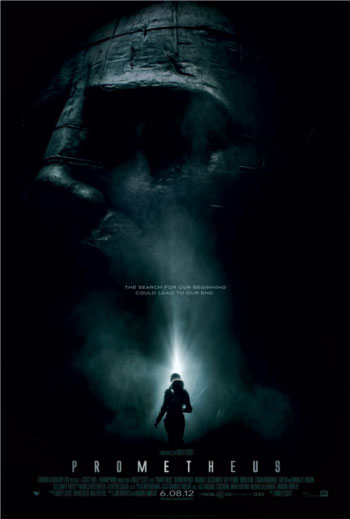 "Big things have small beginnings."
"A king has his reign, and then he dies. It's inevitable."
— Meredith Vickers
Advertisement:

Prometheus, a 2012 Sci-Fi Horror film directed by Ridley Scott, serves as a semi-prequel to 1979's Alien. This film marked the end of Scott's thirty-year abstinence from the science-fiction genre since 1982's Blade Runner.

A team of scientists and astronauts set out on the research vessel Prometheus to unravel the mystery of the dawn of mankind. They seek the Engineers, an alien race who may be humanity's creators; scientists Shaw (Noomi Rapace) and Holloway (Logan Marshall-Green) believe they have uncovered an "open invitation" to find the Engineers within a reoccurring star pattern found in several ancient human writings. The team soon learns that the location is far from welcoming… and that what they've discovered could endanger the entire human race.

Months prior to the film's release, Alien fans speculated about whether Prometheus had any relation to the franchise. Ridley Scott danced around the issue at first by saying Prometheus started as a direct prequel before moving onto something new entirely during its initial inception. But the film itself clarifies its position in the Alien canon with notable references to the Xenomorphs and Weyland Industries (before it became Weyland-Yutani). The plot's main focus, however, is on the nature of the "Space Jockeys" and their connection to humanity.