Film / Queen of the Damned 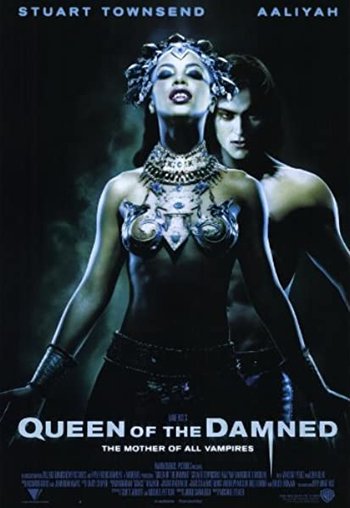 "Come out, come out, wherever you are."
Advertisement:

Queen of the Damned is a 2002 Dark Fantasy film directed by Michael Rymer. Based on the third installment of Anne Rice's The Vampire Chronicles, it is a sequel of sorts to the 1994 film Interview with the Vampire. Unlike its predecessor, though, this film plays very fast and loose with the events of the original novel.

The story begins when the Vampire Lestat (Stuart Townsend) awakens after decades of slumber, and decides to launch a career as the frontman of a Nu Metal band. He soon achieves international stardom, but also earns the wrath of his vampire brethren, who despise him for flaunting his vampiric status, and fear the exposure of their secret world. Yet Lestat's music also awakens a far more potent threat — the ancient Egyptian vampire queen Akasha (Aaliyah, in her second and final film appearance, released posthumously), who promptly embarks on a murderous rampage, mowing down humans and vampires alike in her ascent to power. She chooses Lestat as her new consort, and forces him to become an accomplice in her brutal massacre of humankind. It is down to a handful of friendly-ish neighbourhood vampires — including Lestat's maker, Marius (Vincent Perez) — and student of the paranormal, Jessica "Jesse" Reeves (Marguerite Moreau) to rescue Lestat — and, you know, save the world.