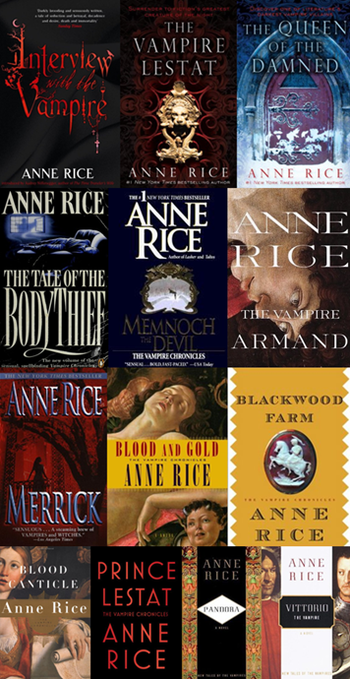 "What does it mean to die when you can live until the end of the world? And what is 'the end of the world' except a phrase, because who knows even what is the world itself? I had now lived in two centuries, seen the illusions of one shattered by the other, been eternally young and eternally ancient, possessing no illusions, living moment to moment in a way that made me picture a silver clock ticking in a void: the painted face, the delicately carved hands looked upon by no one, looking out at no one, illuminated by a light which was not a light, like the light by which God made the world before He had made light. Ticking, ticking, ticking, the precision of the clock, in a room as vast as the universe."
— Louis de Pointe du Lac, Interview with the Vampire
Advertisement:

The Vampire Chronicles are a series of novels by Anne Rice that revolve around the adventures of an ever-changing coven of vampires. Throughout the series the protagonist, Lestat, seeks the origin of the vampire species and tries to fit his need for blood into a workable moral system.

Trope Codifier for the modern day interpretation of Vampires Are Sex Gods. Before Interview the general public's image of vampires was based on Dracula via Bela Lugosi and Christopher Lee, who, while a sex god in his own right, was mysterious, distant, threatening, and a metaphor for rape. Rice's vampires in contrast were modern, petulant, deliciously angsty, incredibly fabulous, and dripping with bisexual eroticism. These were vampires you were supposed to find attractive. The Goth scene owes a ton to Interview with the Vampire.

Of course, this led to everlasting animosity from fans of old school vampires who didn't like that their favorite movie monster were "sissified" and no longer threatening. That continued for years until the Anne Rice vampire craze wore off. Eventually Twilight came along and provided a much worse example of lame vampires, though really harsh critics will blame the former for setting the stage for the latter to be created. Nowadays the cultural importance of The Vampire Chronicles has been forgotten by everyone except hardcore vampire fans, though said influence itself remains all-encompassing and is likely to persist in the zeitgeist for a very long time.

Related books (The New Tales of the Vampires):

Two of the books have been adapted more or less faithfully to film: Interview with the Vampire and Queen of the Damned.

Some novels in the series Crossover with Anne Rice's witch-centered trilogy, Lives of the Mayfair Witches, namely Merrick, Blackwood Farm and Blood Canticle.

A television adaptation of Interview With the Vampire premiered on October 2, 2022.

Alternative Title(s): Interview With The Vampire, The Vampire Lestat, The Vampire Armand, Queen Of The Damned, Prince Lestat, Merrick, Memnoch The Devil, Blood And Gold, Blackwood Farm, Blood Canticle, The Tale Of The Body Thief