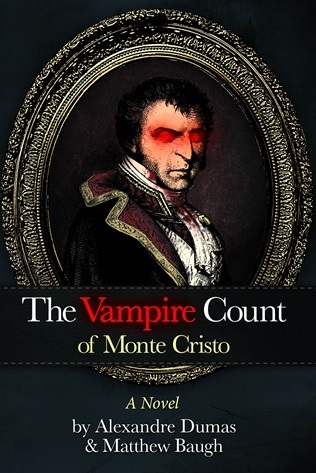 After imprisonment in the Château d'If for a crime he didn't commit, Edmond Dantes conspires to escape with fellow prisoner the Abbe' Faria. Discovering that his friend is an alchemist, he uses the man's knowledge of sorcery to conjure the Angel of Vengeance (and possibly the Devil) to give the strength to wreck "God's wrath" upon his enemies. Transformed into a (un)holy creature of the night, Edmond Dantes uses his powers to bring about a terrible end to his foes.

Re-Written by Mathew Baugh and published by Permuted Press, The Vampire Count of Monte Cristo is a literary mash-up in the vein of Pride and Prejudice and Zombies and alternate historical story Abraham Lincoln: Vampire Hunter. Veering surprisingly close to the text, the story manages to include many parts of the original novel usually adapted out while introducing supernatural elements that do not disrupt the original novels mood. Some have drawn comparisons to the Japanese anime Gankutsuou despite different themes.