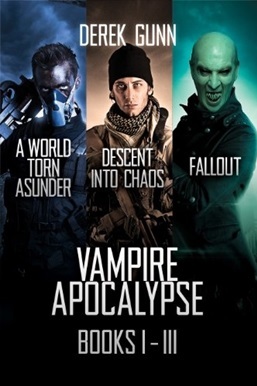 The Vampire Apocalypse series is a trilogy of books by Derek Gunn published by Permuted Press. It depicts the conquest of the world by vampire forces and the attempt to liberate the world from their control.

The drying up of the world's oil resources leads to the fabled End of Days. Technology stagnates and communities grow ever more insular. With communication between cities lost and attention turned inward, the vampires rise from the shadows where they have survived for centuries and sweep across the globe.

By the time word spreads it is far too late and Vampires enslave humanity and keep them in walled cities to breed. The Vampires are masters of the darkness but maintain control by day through the use of Thralls — humans who have been bitten but have not yet crossed over, and whose inhuman lusts make daylight as terrifying as night.

Three books have been published so far in the series. A World Torn Asunder, Descent, and Fallout. Not to be confused with Vampire Apocalypse as a variant of Zombie Apocalypse. It is now being turned into a graphic novels and has been optioned for a movie.