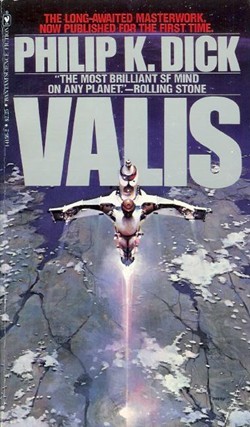 Horselover Fat is not having a great time. A friend of his checked into therapy only to throw herself off a building. This, combined with his wife's nervous breakdown and the Soviet three-eyed space aliens beaming messages into his head with a pink laser beam, is enough to drive him to complete insanity.

Thus, the book begins. Throughout, Horselover Fat is confronted by the Soviet Union, Satan (in the form of Ferris F Fremont), Jesus, alien space lasers, and his own possible madness.

Philip K. Dick's second-to-last completed novel, VALIS is about his own experiences with something in 1974. Drugs? Schizophrenia? Alien intervention? And what does the name Horselover Fat mean?note It's a literal translation of Dick's name, Philip meaning "friend to horses" and Dick being German for fat.It's difficult to say, but it's certainly some kind of novel.

An early draft of the novel, Radio Free Albemuth was published in 1985 and later adapted into the 2010 film of the same name.

No relation to the video game.