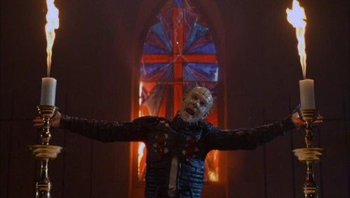 The Rule of Symbolism dictates that rituals in fiction will often be related to real-world religion. One of the most widely known religious practices is the Eucharist, instituted by Jesus Christ at the Last Supper. In the last supper, Jesus Christ took part in bread and wine and shared with his disciples, claiming that they were eating his flesh and blood. This would later be dubbed "the Lord's Supper" or "Eucharist", and has become a very popular ritual in modern Christian traditions.

Sometimes, however, the image of eating Christ's Flesh and drinking His Blood gets rather twisted into something horrifying, rather than loving and self-sacrificial. This usually involves taking the words out of context, perhaps skipping over the bread and wine to get flesh and/or blood from their normal source (and in settings where Religion Is Magic, this trope can overlap with Cannibalism Superpower). The origins of such practice usually shift depending on the intent of the creator, either taking the original practice as a blue-print in creating their own fictional religions, or as a direct mockery of Christianity and other, similar practices other religions may possess.