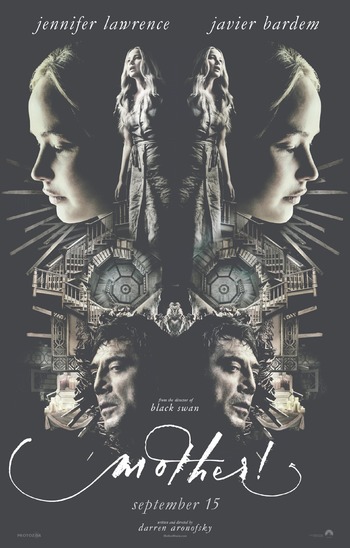 seeing is believing.
"All I'm trying to do is bring life into this house! Open the door to new people, new ideas!"
— Him
Advertisement:

mother! is a 2017 Psychological Horror film by Darren Aronofsky. It stars Javier Bardem, Jennifer Lawrence, Ed Harris, and Michelle Pfeiffer, among others.

The film centers around the poet "Him" (Bardem) and his pregnant wife "mother" (Lawrence), who share a tranquil existence in a country home that is interrupted by the arrival of a mysterious Man (Harris). The Man's presence leads to a string of uninvited visitors, who are all welcomed by Him.

Meanwhile, mother grows alarmed by the presence of the strangers, who impose more and more on her hospitality. With Him deaf to her pleas, she's left increasingly helpless as circumstances spiral wildly out of control.

The idea for mother! came to Aronofsky while he was working on a children's film following the release of Noah; he reportedly wrote the film's first draft in an uncharacteristically fast five days.

open/close all folders
#-F
G-M
N-S
Advertisement:
T-Z
"GET OUT OF MY HOUSE! GET OUT!"