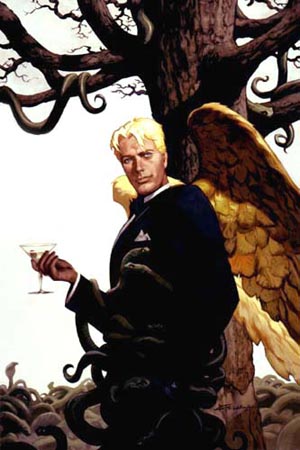 "Perhaps this is the ultimate freedom, eh, Dream Lord? The freedom to leave..."
— Lucifer
Advertisement:

The only spin-off from The Sandman (1989) to not only manage long-term success but also become a critically acclaimed comic in its own right, Lucifer followed the life and times of the eponymous fallen angel after he gave up being the Lord of Hell to run a piano bar in Los Angeles. After accepting a commission from God to deal with something that threatens humanity, he finds himself the owner of his very own universe. There follows an epic adventure in which Lucifer fights to escape the control of his father, God, while dozens of other parties unveil their own macabre plans.

Lucifer himself is an arrogant sociopath with a dry wit, who — with a very few exceptions — cares only for himself and his mission and will kill or severely inconvenience anyone who is stupid enough to get in his way. Despite popular conceptions of the devil, or perhaps playing them quite straight, he is a handsome, suave figure who makes a point of never lying (not that it means much) and always pays back what he owes. He has never tempted anyone into committing sins and indeed seems to find it slightly depressing when they live down to his expectations.

Along the way the comic picks up a recurring cast of about 12 other characters, including Jill Presto, a stage magician who makes a dangerous pact; Gaudium, a cigar-chomping former cherub; Elaine Belloc, an English schoolgirl with unusual powers, and Christopher Rudd, a damned soul who becomes the plaything of a cruel demoness.

Lucifer first appeared in The Sandman #4 (April, 1989). He also had guest appearances in The Books of Magic and in titles featuring The Spectre and Etrigan. He received his own mini-series The Sandman Presents: Lucifer (March-May, 1999) and then graduated to an ongoing series, which lasted for 75 issues (June, 2000-August, 2006). Both the mini and the ongoing were written by Mike Carey. A variety of illustrators worked on the titles, but the most important were Peter Gross and Ryan Kelly.

A sequel to the comic book series (written by Holly Black) was released on December 2015, starring the eponymous character and his brother, Gabriel.

Lucifer got a series on FOX in 2016, with Tom Ellis playing the character. Like the comics, it focuses on him as he decides to leave the literal Hell for Los Angeles, aka Hell on Earth. There, he runs a very popular nightclub while also doing "favors" for various people. When a singer with a promising career he helped start is gunned down in front of him, he finds himself with an urge for punishing sinners once again, and he strikes up an unusual partnership with a local homicide detective.

Another version of the character, this one portrayed by Gwendoline Christie, will appear in Netflix's live-action adaptation of The Sandman.