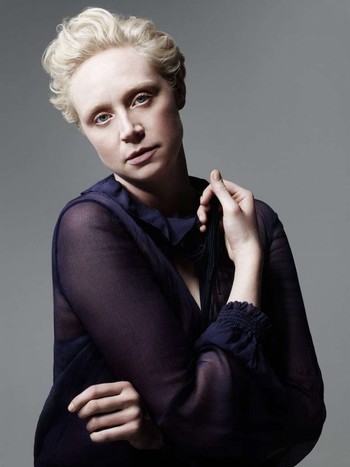 Submit your blaster for inspection.
Advertisement:

Gwendoline Christie (born 28 October 1978 in Worthing, England) is an English actress and model known for being 6 feet 3 inches tall, making her one of the tallest actresses in the world, and best known as Brienne of Tarth in Game of Thrones and Captain Phasma in the Star Wars sequel trilogy that started with The Force Awakens. She hails from the South Downs, and started doing gymnastics at school there, but a spinal injury caused her to switch to acting. She was trained by actor-author Simon Callow and graduated from Drama Centre London in 2005.

After finishing her studies, Gwendoline settled down in London, and began acting in stage plays, notably as Lucifer in Christopher Marlowe's Doctor Faustus. Like many English actors, she acts in stage plays, movies, and TV shows. She was also the subject of a series of pictures by photographer Polly Borland. She obtained the role of Brienne in Game of Thrones in a nearly uncontested audition after showing up in armor. Her portrayal of Brienne gained widespread praise.